Born on the 4th of June 1981 in La Louvière, Belgium. When he started listening to electronic music in 1993 he quickly discovered he would dedicate his whole life to nl gabber & underground music hearing tracks like Robert Armani “Hit Hard” or RMB “The place to be”. After a few years to build his own DJ “arsenal”, he began playing “live” at the age of 16 in small garage-parties in 1997. The same year he met the “hardcore veteran” Liza n’ Eliaz in Antwerp, giving her his first demos, all done on collaboration with his oldschool italian gabber bro’ called Drave. Liza opened his mind to harsher styles & from then he started playing real speedcore/terror & met Sub Zero from Cunt Records who also became a friend.

Since 1999 he mixed in a lot of clubs in B & Fr (Axiome,La bush,Wacko,Club 73,Ritz…). The same year he was thrown out by security while mixing in a terror party with Godefried (Sub Zero) because he was playing ways too hard! From this little misadventure he gained in popularity & was considered as one of the hardest DJ’s in Belgium ever. In 2004, he had a gig with Manu le malin & Torgull in front of 10.000 people at Dour Festival (Be), where he let the crowd hear tracks at 400bpm’s & more… This was the beginning for a new era: because of the fuckin’ so-called “skinheads” motherfuckers who ruined every parties, he quit gabber for speedcore & every styles he likes including Breakcore, Industrial, Hip-Hop, Speedmetal, Drum n’bass,… Since 1999 he has had the oportunity to play with great DJ’s like: Vince (Shadowlands Terrorists), Tieum (Altern-hate), The Teknoist (Rebel Scum), Radium (Audiogenic Records), Manu le Malin & Torgull (Bloc 46), Sandy Warez (Third Movement), The Outside Agency (Enzyme), Mutante (CSR), The Vizitor (Noisekick rec), Bass (D.H.T), Kaboz (Drumadix), Sub Zero (Cunt Records), Eustachian, Casual Suspekt, Reflex, Jay Kriss, Cronik… Producing alone since 2008. 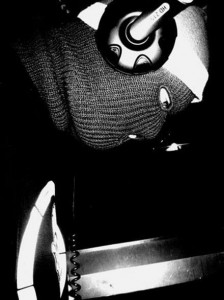