Cedric kicked off his career as a DJ and techno composer / producer under the pseudonym “Acid Kirk” in 1993. He quickly established himself as one of the most revered figures in the Belgian scene and his reputation soon spread beyond his home country’s borders. Between 1993 and 1997 he produced over a dozen records (now widely regarded as classics of the genre) and regularly performed at most of the major Belgian clubs and dance events (Fuse, Rave Explosion, Cherry Moon…). He was also frequently booked to play abroad in a number of theworld’s major cities – New York, Melbourne, Paris (Rex Club), Rome, Vienna, Berlin (Love Parade) and Amsterdam (Melkweg) – often sharing the bill with many of the biggest international DJs, namely Jeff Mills, Laurent Garnier, Miss Djax, Richie Hawtin, Dave Angel and Dave Clarke.

In 1997, driven by his growing interest in free jazz, alternative, psychedelic ambient and experimental music – and the avant-garde in general – he co-founded Elf Cut records and assumed the role of art director for the label. He also launched his new project: “The Syncopated Elevators Legacy” (S.E.L.), with which he would go on to explore fresh sonic horizons. Over a period of four years, Elf Cut put out ten records (including three S.E.L. releases) and quickly came to be known as one of the more influential labels on the avant-garde electronic music scene. S.E.L. performed at numerous venues and events, primarily in Belgium and France (AB, Nuits de Botanique, Halles de Schaerbeek, Festival de Dour, Recyclart, Vooruit, Zaal Belgie, De Singel, Batofar (FR), Festival Multimedia de Cr?eil (Fr),Centre Culturel de Nantes (FR)…). S.E.L. records were enthusiastically received by a number of prestigious artists (Christian Fennesz, Vibracathedral Orchestra, My Cat Is An Alien) and a few of the tracks even caught the attention of the late John Peel, who played them on his legendary BBC radio show.

Between 2000 and 2004 Cedric composed the music for three productions by choreographer Bud Blumenthal: “Les Entrailles de Narcisse”, “Red Cliff” and “Les Sentiers d’Ulysses”. In 2003 the Flemish Community commissioned him to reinterpret a work by the contemporary music group “Hermes Ensemble”, which he performed at the Theaterzaal in Vooruit, sharing the bill with pianist Kris Defoort and the Hermes Ensemble themselves. These ventures illustrate the evolution of his approach, which has become increasingly influenced by minimalist and contemporary music.

In addition to his work under the S.E.L. banner, Cedric formed the “Drifting Bears Collective” in 2003. Accompanied by a guitarist, a bassist and a drummer, he would use this new side project to develop the more physical aspects of his music – and thus a long creative process was set in motion, culminating in the release of the album “South of No North” in 2007. A psychedelically noise-esque free rock epic of sorts, this album garnered high praise from the discerning music press, receiving glowing reviews from publications such as “Riff Raff” and “The Wire” (the ultimate international reference magazine for the best in alternative and avant-garde sounds). The Drifting Bears Collective is also known for its numerous concert performances, having appeared alongside eminent neo-folk entities from across both the Channel and the Atlantic (No-Neck Blues Band, Vibracathedral Orchestra, Double Leopards,…).

Using his own name when performing in the experimental and minimalist music domain, Cedric’s appearances and involvement in this scene are increasing. He recently participated in the “toute craut est elle bonne dire” expo at the “centrale electrique”, for which he performed an audiovisual piece in collaboration with the painter Serge Golwicht on the day of the private view (6/2/2009). It was extremely well received by the public.

The Communaut Francaise issued Cedric a grant for the creation of a minimalist piece that was to receive its first public performance on the 19th of June 2009 at the Notre Dame de la Chapelle church as part of the “Fetes de la Musique”. This took place on the minimalist night, during which prominent international artists such as Janek Schaeffer, Christian Fennesz and Alva Noto also performed.

Cedric recently dusted off his Acid Kirk alter ego and released a new EP titled “Out of the Blew” in February 2010, co-produced by the labels WeMe and First Cask. This revival of interest brought a lot of new bookings and Acid Kirk performed a lot that year on the national & international scenes, playing in main events in cities such as Den Haag (The Netherlands), Rome (Italy) or what could be seen as a consecration, a gig in the most world-famous organization of underground rave parties: Bangface (n?72) in the center of London (U.K.). In the meanwhile Drifting Bears Collective recorded their second album, changing their names to “South Of No North” and welcoming a high profile new member in the band: Laurent Baudoux (aka Sun Papa) who released lots of incredible music under various pseudonyms (Scratch-Pet-Land, Fan Club Orchestra, Baleine 3000), mainly on the great Koln based Sonig record label. This new album is called “Octopussies Liability” and will be released in the months to come by the Brussels label “Humpty Dumpty”.

Cedric is now back working on his drone experiments and will focus on this side of his work for the next period, ’till a record in that field will be ready to release. 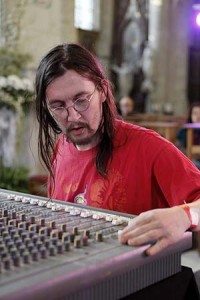