<Bio>
I’m from small city which is in the north of Russia. I started making music as a guitarist in grindcore/mathcore band in like 2004…. We recorded 2 albums and played many gigs. But after a while the band has collapsed. However, music has become my passion and I wanted to keep goin’ with it.

I always wanted to put some electronic parts to my instrumental material. So, I started to learn how to make electronics. I tried different things, tried to use my instrumental background in electronics. As a result I made a short album “Microdot Microspace”. It was something like downtempo or triphop or whatever . . . After a while, I began to work with different musicians and wanted to make band again. But everything was wrong in that city.

I moved to Moscow. Fucking 20 million people and you feel like a shit but it gave me many possibilities. I went on terror/breakcore parties, met people, met musicians. I could ask ’em and that was great. I learn how to make breakcore, how to make electronic music, how all this underground music society works.
I began to live this underground. 2nd album “Starshine” has been written in Moscow. All those events gave me a lot of ideas. I just tried different styles like speedcore/8bit/glitch/blah blah. . . all mixed with breakcore. When it was finished I started to play gigs.

Parties gave me even more. I spoke with interesting people again and met new and new musicians. I absorbed new ideas. Each day I lived only my music. I wrote it, I played it, and all other time I thought ’bout music. Pure emotions and feelings. My life was f’ing hard that time. I tried to survive. Kept money to rent an apartment, found time to write my stuff. Damn city where you gotta pay 1000$ per month for 1 room flat.

I finished “Fuck Tha Void” album in February 2009 and after long label search I stopped on Merry Works. It’s a nice Japanese record label. I send all materials to the owner and the artist made me a cd cover. The label said that they are sending everything to factory to make cds and I was happy at last. Next day the owner (Di-bit) deleted his page, the page of a label, and so on. Nobody knows what happen to him. There’s no any contacts to speak to him. He just disappeared from the internet. . . . I hoped he was fine, I didn’t know. 3 months later, i couldn’t wait any longer and I shared my 3rd album. But it wasn’t the end… Di-bit appeared as suddenly as he disappeared but in a whole year. He send me cds and everything was great.

2009 was really amazing. I played a lotta gigs in different cities. Performing and traveling are the best things in the world. In summer i played with Horse the Band (my very favorite band) in Minsk and Kiev and after i while i made 2 remixes on their songs. I was so happy that it happened. One rmx is released on their album “Desperate Living (Deluxe Edition)”. Also, in the end of a year I played on SickFest (the biggest breakcore event in Russia) and later I released on their small cd compilation.

2010 was even better. I played gigs in many new places (like Minsk, Petrozavodsk, Saratov, St. Petersburg and even Murmansk). It was so exciting. I started to make bass tracks cuz fashion is changing so fast and u gotta try something new n stay up 2 date. I made a vinyl split with Gromov. I released 2 non-breakcore tracks on it. I went to my 1st small tour which took a week. I got a lot of experience in the end. I always was close to instrumental mathcore. I mean people and music. So, I made my own band GHFC.

After 1,5 years of work a new 4th full album “Worshiping Mars Triangle” is ready. The release will be really soon.
Also next album “Saturn Falcons” is ready. Now, being released on multiple labels at once through net distribution. 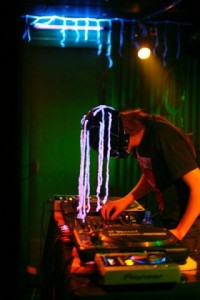