Belgian DJ, Krasius has always been a admirer of all things electronic. He started his late night adventures in the middle of the 90’s always trying to deepen his musical knowledge. A great fan of Warp, Rephlex, Ninja Tune, Sub Rosa, Hymen, Ant-Zen, Mego, Worm Interface and Skam.

Always found playing with his friends vinyls over the years growing up and when he had the chance around 2005 he got t…urntables of his own and decided to intensify his practice, in no time at all he started to broadcast his own mixes. In 2009 he joined forces with his friends at Maldita Rec and since then has performed at many Maldita parties and festivals in Belgium and elsewhere as well as a festival in Croatia in 2011 to great review. He has also taken part in many radio programs including shows from Belgium, Greece and the U.K and
in 2012 he was invited to join Structural Damage.

Krasius likes to mix different styles from electronica music including idm, industrial, drill, breakcore, acid and many more and also likes to realize ambient mixes with 3 or 4 turntables. Mixing music, field recordings, film samples and many other sound sources and using 2 other turntables with Scratch pro to spice his sets with many other ideas. 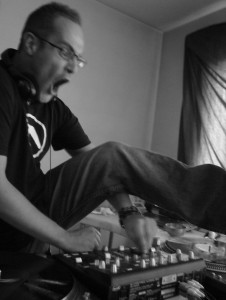