Gliding in from Rigel 5, The Grand Ayatollah arrived on this earth during the mid 1980s in a similar fashion to Sun Ra, but with less sequins and Egyptian iconography. After adjusting to his human form, the Grand Ayatollah quickly learnt the ways of mankind, inadvertently picking up his awful musical tendencies in the process.

Hailing primarily from a Post Punk background, the celestial one soon combined his love for rock and roll with shitty Dutch Hardcore and UK breakbeats. The result was a piss soddon tyrade of chin stroking IDM, slamming Gabber and awkward Noise rock time signatures. Influences range from Rocket From The Crypt and Nation of Ulysses to DJ Neophyte and Hellfish, and hobbies include fine east & south Asian cuisine, Reggae, Fred Perry, Doctor Who and members of the opposite sex. 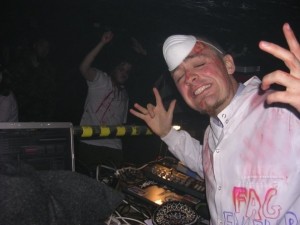 The Grand Ayatollah - Circa Then