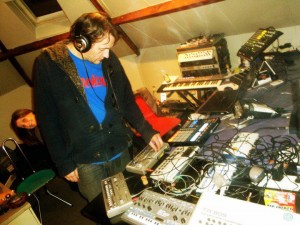 The efflorescense of the persona deeply attached to analog instruments and all that surounds them.

Analog Devices has been creating music for over twenty years. It began in the late 80’s when he swapped his electric guitar for a TB303 and TR606 at a musical instruments shop (Charlie’s music) situated in the centre of Brussels.

During this period the House/Techno scene had a different reputation, the music itself not recognised for what it was and discarded …often described as “not real music” by “real musicians”

It was in the shadow of this view where a paralel universe, another scene was born.

It was in this new and unusual place where Analog Devices came back into contact with Modular II…(whom he had been a student of, studying modular system techniques and applying them practically,  hand-constructing entire systems.) …. as well as André Stordeur whom he had the privelege to learn from,  using RSF Kobol, Oberheim and Serge systems.

Together, they pushed forward the idea of playing modular , live at Techno and Experimental Acid parties in Brussel venues like the PK studio, Botanique, Le Bulten, Cybertheatre and Caves de la Chapelle…. but also outside the capital such as “la chapelle” in Liege. They built and sold systems to the local artists,  extending their influence in the music itself.

Absorbia, the Capital of this paralel world  … and in its suroundings , Parties began to spread into unusual places , hangars, barges, basements, outdoors in the open , underneath motorway bridges etc….  and where Analog Devices performed live alongside Little Pat, D-Jack, Joost de Lyser, Toxic R8, MBX Wolf, Popane and many others….

Organised – between 1989 and 1994 – Analog Devices was prevented from playing 14 times, many parties were being shut down by the authorities and at times both promoter and artist being taken into custody. Despite agressive tactics this group of like minded artists continued to fight for the music, taking it deeper underground into the hidden, even more stranger places.

1994 – was involved in the creation of subground technology and its events at the pk studio, the first big events for Acid and electronica in Belgium.

1996 – Faced with no choice… he decides to sell his entire studio built up through the years and leaves for South America. He returns the same year, back with a thirst stronger than ever to make music, he goes on a quest to re-construct a new studio even more meticulously, piece by piece.

2003 – The new studio is fully going… music projects, production of tracks , experimentation in the studio go into first gear

Currently since 2010, he is organising alongside his artistic circle and friends, the Acid-Food parties which brings both inventive music and fine cuisine together. As well as a fully analog (no computers) live music experience, artists from different styles jam all together through the night.