Company Fuck is a one-man noisecore karaoke explosion. CxFx works in his own distinctive sonic territory combining extreme vocal improvisation, digital noise, hacked electronics, and deliberate musical homage/parody. With no allegiance to one sound or scene, CxFx simultaneously plunders pirated pop music whilst also blowing apart the formulas of so-called ‘underground’ genres. CxFx often sounds like one man conjuring a million artists together for a bloody entangled mess of manic audio intercourse and copyright infringement. Nobody is safe from the CxFx treatment.

CxFx is known for his brutal and unpredictable live shows, which has found audiences strangely entertained on tours all over Europe, Australia, and New Zealand. Sure, CxFx uses a laptop, but any similarity to other computer musicians stops there. In performance CxFx is a totally improvised wireless noise monster, able to fast-forward through an entire rainbow of musical styles with every electrified scream, grunt, cough, or spit. In his own unique way, CxFx transforms the stage into a hyper-violent karaoke bar of the future – and he may even persuade the audience to sing along. 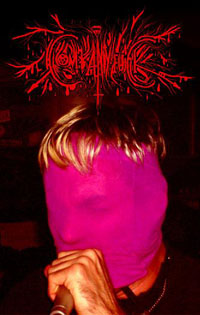